Results of the III international contest of ballet artists

The III international contest of ballet artists in astana announced the names of laureates!

The third and final round of the ballet contest in Astana was completed and the names of the laureates were announced. During the week contestants from different corners of the world, such as Russia, Japan, Belarus, Ukraine, Kazakhstan and other countries contended for skills and academicism. The competition program was varied and rich: in the first round, variations and duets of classical ballets were mandatory, in the second there were added a modern choreography, resulting in showing of the full range of contestants’ abilities. As a result of rigorous selection, 16 participants were admitted to the final round of the contest, whose professionalism and high creative potential were appreciated by an authoritative jury. Intensity of the competitive battle was high, discrepancy in points was literally estimated at tenths. Before the jury there was a difficult task to determine equals to the best. Discussion of the contest results by the jury members lasted approximately 2 hours, after that the names of the winners were announced. Members of the jury especially emphasized a high level and excellent organization of the contest. 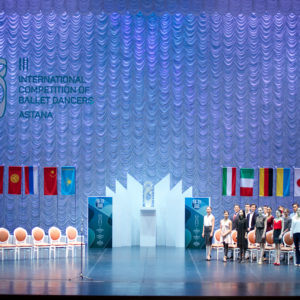 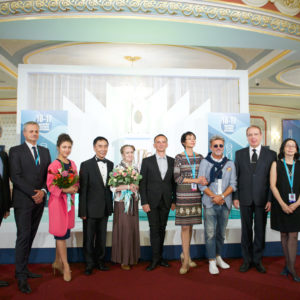 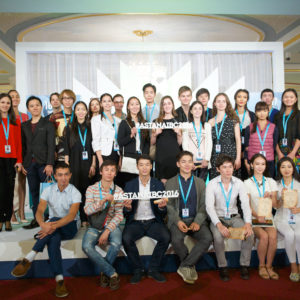 The undisputed leader of the contest and the Grand Prix holder became a leading soloist of ASTANA OPERA theatre, Bakhtiyar Adamzhan.

First prize and second prize among men won the soloists of the Moscow theatre, Serik Nakyspekov and Yerkin Rakhmetullayev. Artistry of a young artist Serik Nakyspekov was awarded with a special prize of Astana city akimat and Yerkin Rakhmetullaev simultaneously won the special prize of Petipa Heritage Fund and “PETIPAPRIX” Bratislava National Theatre for the best interpretation of the classical heritage, and consequently he got a chance to play the main male role in the ballet of Marius Petipa “Corsaro” at the stage of the Bratislava National Theatre in the season of 2016-2017.

The third prize was shared between a contestant from Belarus, Konstantin Geronik and a participant from Kyrgyzstan, Farukh Sadyrkulov, penetration into the character of the first contestant and technical mastery of the second one caused permanent applause in audience hall throughout all competitive days.

The jury decided not to award the first prize among women. However, it says not so much of weak female members, as of a high exactingness of the jury and contest status.

The second prize was shared between contestants from Ukraine, Nataliya Ivasenko and Ellina Pokhodnykh, whose academicism and sense of style were especially noted by the chairman of jury, Altynay Asylmuratova. Ellina Pokhodnykh and Konstantin Geronik received a special prize from the ASTANAOPERA theatre, namely invitation to take part in performance in the season of 2016-2017.

The winner of the third prize among women was a technical participant from Belarus, Alexandra Chizhik.

The Ministry of Culture and Sport of the Republic of Kazakhstan awarded a special prize to participant from Ukraine, Ellina Pokhodnykh – for purity and academicism of classical dance.

Special prize for partnership was awarded to Viktor Tomashek from Ukraine.

“Nadezhda” prize was won by a young ballet couple from Yakutia, Mariya Kuzmina and Timofey Fedotov, who, unfortunately, failed to participated in the third round, but were noted as very promising artists.

The winner of the special prize for the best performance of modern choreography was the soloist of “ASTANA BALLET” theatre, Riza Kanatkyzy.

“There are no losers and winners in a creative contest, as here everyone is a winner, – said the chairman of the jury, Altynay Asylmuratova to the contest’s participants – you’ve got a new experience, we saw your potential, and, most importantly, you’ve got new aims. I think you’ve learned a lot from each other”.

Founder of the 3rd International Contest of Ballet Artists, private fund “Fund for development and support of ballet and national dance”, the main tasks of the contest considers popularization of classical ballet in Kazakhstan and identification and promotion of talented artists as the main tasks.

As opening in Astana of the Kazakh National Choreography Academy in, this contest has became a real embodiment of these tasks, and that was once again noted in the interview by an authoritative expert in the field of ballet art, professor of the Beijing Dance Academy Xiao Suhua: “I think that this competition for Kazakh ballet art is very is very important. You have such a beautiful theatre, undoubtedly the best in Asia, we saw a new Academy of Choreography, analogues of which I have never seen in the world. I can see a scope and scale in everything! And you have a very potent school of classical dance. And now, when the Academy and ballet company is headed by such professional as Altynay Asylmuratova, the level will increase, because she has a very high standard! When I see the attention paid to culture in your country, I see the wisdom of such approach, because it is the culture that determines a spiritual development of the nation”.